Ads are visible in the basic free version of Locus Map only
By un-checking this you are offered purchasing banner-free Premium:

Hides system panels at the top (or bottom) of the screen to enlarge the map area:

This feature may not work correctly on some devices.

Switches the user interface (panels, screens) into the battery and eyes-saving appearance.

There are four modes:

Controls rotating of the display depending on the phone position.

Selects the position in which the display will be locked:

Defines situations when the screen is turned on/off by gestures or by events within the app.

Android 7+ “Nougat” users: this feature does not work in Locus Map installed in your external SD memory - your OS does not assign proper permission to it. Move your Locus Map to your internal shared storage:

The option overrides the Android system screen on/off setting but does not influence the settings made by Locus Screen on/off control feature. It is available only with Premium.

Locus Map prevents the phone screen from turning off:

Keeps the device's screen unlocked for Locus Map. When you switch the screen off while Locus is on it, you can get back without the need to unlock the screen.

Locus Map can be controlled by local or external buttons and other controllers:

When switched on, the manual map rotation and panning are deactivated when pinch-zooming. To rotate the map manually, switch this option off.

Tap and hold to display address

When checked, long-pressing a place on the map displays a panel with an address:

The address provider (Google, GraphHopper or Bing) can be set in Miscellaneous.

Available only with Premium

Moves the map screen cursor down by 1/4 of the screen. Functional only with the map rotation on. Useful especially for navigation or guidance:

If you shift the map out of your current position when browsing it, this function centers it back on current GPS location after 5 secs of inactivity. The status is indicated by a “padlock” on the centering button: 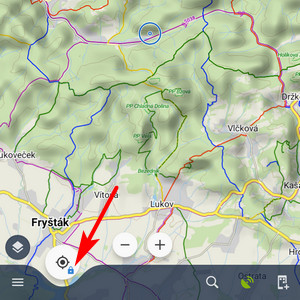 The back-to-location interval can be changed in the Expert settings.

You can activate/deactivate this also by long-pressing the centering button.

Enables measuring the distance between two fingers touching the screen: 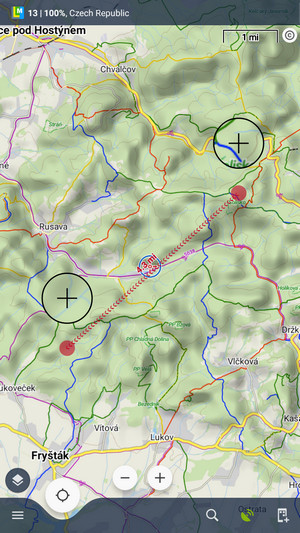 Here you can select a set of location and tracking cursors, set their size, or add your own. 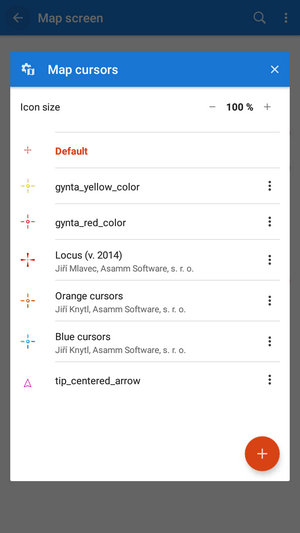 Available only with Premium

Sets connection between speed and displayed map zooms or distance from a navigated target. Bigger zooms for slow speeds/closer distance and vice versa. Useful for navigation and guidance.

Num of rows in main menu

Here you can define the number of rows of buttons in the main menu button grid. From 2 to 5 rows.

This swaps the main screen controls from left to right for those who prefer controlling their phone with the left hand:

The functions panels in Locus Map enable quick launching of your favorite functions. They consist of the bottom and right panel containing functions switching buttons.

How to set the function panels >>

All controls and panels on the main screen can be displayed, permanently hidden or hidden automatically after a few seconds of inactivity. The automatically hidden controls can be displayed by single or double tapping the screen (depending on your selected Map control style). This way you can precisely configure the main screen according to your needs and preferences.

Here you can configure hiding of the panels/controls in relation to the screen orientation:

In case the panel hiding is on it sets the time interval before the panels slip in.